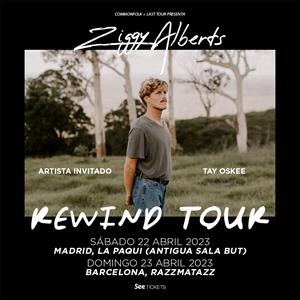 
Ziggy Alberts will return to the UK and Ireland as part of his REWIND TOUR in 2023. A run of eight shows across England, Scotland and Ireland, this tour will see Alberts play esteemed and town favourite venues.

This highly anticipated tour celebrates the release of Ziggy’s forthcoming studio album, DANCING IN THE DARK, set to be released on 4 November 2022 and marks his return to the UK and Ireland since performing a string of sold-out shows as part of the Laps Around The Sun World Tour in 2019.

On the REWIND TOUR, fans old and new can anticipate a show full of Alberts’ signature, energetic and captivating stage presence. Be there as he opens his heart to crowds and shares his melodies of adventure, courage and connection. Expect singalongs from his ARIA Top 5 Album searching for freedom, his eagerly awaited release DANCING IN THE DARK, and of course, the fans' foot-to-thefloor favourites. It's a show you won't want to miss.